The report “Controlled Release Fertilizer Market by Type (Slow Release, Coated And Encapsulated, Nitrogen Stabilizers), End Use (Agricultural and Non Agricultural), Mode of Application (Foliar, Fertigation, Soil), and Region – Global Forecast to 2026″ The global controlled release fertilizer market size is projected to reach USD 3.3 billion by 2026. The market for controlled release fertilizer is estimated at USD 2.4 billion in 2021; it is projected to grow at a CAGR of 6.4% to reach USD 3.3 billion by 2026. 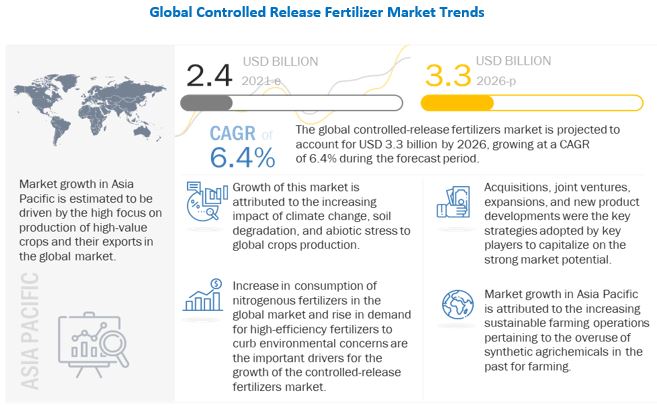 Asia Pacific accounted for the largest share; during the forecast period, in terms of volume and value, respectively. Increasing growth of high-value crops and rising awareness among farmers about the environmental benefits of controlled-release fertilizers are expected to provide more scope for market expansion. The government policies adopted by Asia Pacific countries and the large subsidies, sometimes up to 100% for marginal farmers, provided on fertilizers are the major factors triggering the growth of this market in the region. In North America region the demand for controlled-release fertilizers is expected to increase in the near future due to the shrinking arable land. Mexico, on the other hand, has the advantage of a warm climate; however, the relative arable land is significantly less than the others. Given the high prices of controlled release fertilizer, the market has remained popular in developed markets, with high disposable incomes and demand.

The coated and encapsulated segment by type is projected to achieve the fastest growth in the controlled release fertilizer market.

The coated & encapsulated segment accounted for the largest market share during the forecast period. An increase in the application of coated fertilizers for cultivating high-value crops has led to a surge in demand in developed countries. The need for predefined and patterned nutrient release in the case of high-value crops and horticulture triggered the development of polymer coatings in the market. The rate of the release of nutrients can be controlled by the composition and thickness of the polymer coating. The nutrient release is dependent on temperature and the moisture permeability of the polymer coating. The moisture permeability of the capsule can be controlled by changing the composition of the polymeric coating material used. Since it is not dependent on soil properties, the prediction of nutrient release at a given time is possible for polymer-coated fertilizers.

By mode of application, the fertigation segment is projected to account for the largest market share in the controlled release fertilizer market.

The controlled-release fertilizers market, in terms of application method, was dominated by fertigation. Owing to the increasing irrigated land, fertigation is highly preferred as a suitable application method adopted in both developed and developing countries across the globe for the application of these fertilizers. Also, the labor costs are reduced to a large extent through the adoption of these techniques. Hence, this segment is also projected to be the fastest-growing in the coming years. Though this technique allows uniform fertilizer application to some extent, newer and better technologies supporting precision farming practices can be developed. The combination of precision farming practices and controlled-release technology is expected to exhibit a synergistic relationship for the benefit of the global agricultural industry

The non agricultural sub-segment by end use is projected to account for the largest market share of the controlled release fertilizer market over the forecast period.

The non-agriculture segment is projected to account for the largest share. The growth in purchasing power and the rising environmental issues have led to an increase in the demand for CRFs in non-agricultural.

Asia Pacific is projected to be the largest market.

The key players in this market include Yara International ASA (Norway), Nutrien Ltd. (Canada), The Mosaic Company (US), ICL Group (Israel), Nufarm Ltd. (Australia), Kingenta (China), ScottsMiracle-Gro (US), Koch Industries (US), Helena Chemical (US), and SQM (Chile). These players in this market are focusing on increasing their presence through agreements and collaborations. These companies have a strong presence in North America, Asia Pacific and Europe. They also have manufacturing facilities along with strong distribution networks across these regions.

Service And Repair In bhavnagar

Openfree DemataccountBusinessAugust 19, 2022
Learn All About Photography In This Piece   Do you want to take the next step beyond casual photography? Learn …
END_OF_DOCUMENT_TOKEN_TO_BE_REPLACED

Daybed Swing and What to Consider Before Purchasing One

David BelserBusinessAugust 30, 2022
Guests will appreciate the thoughtful touch of a swing in the backyard or on the porch when they arrive. A …
END_OF_DOCUMENT_TOKEN_TO_BE_REPLACED