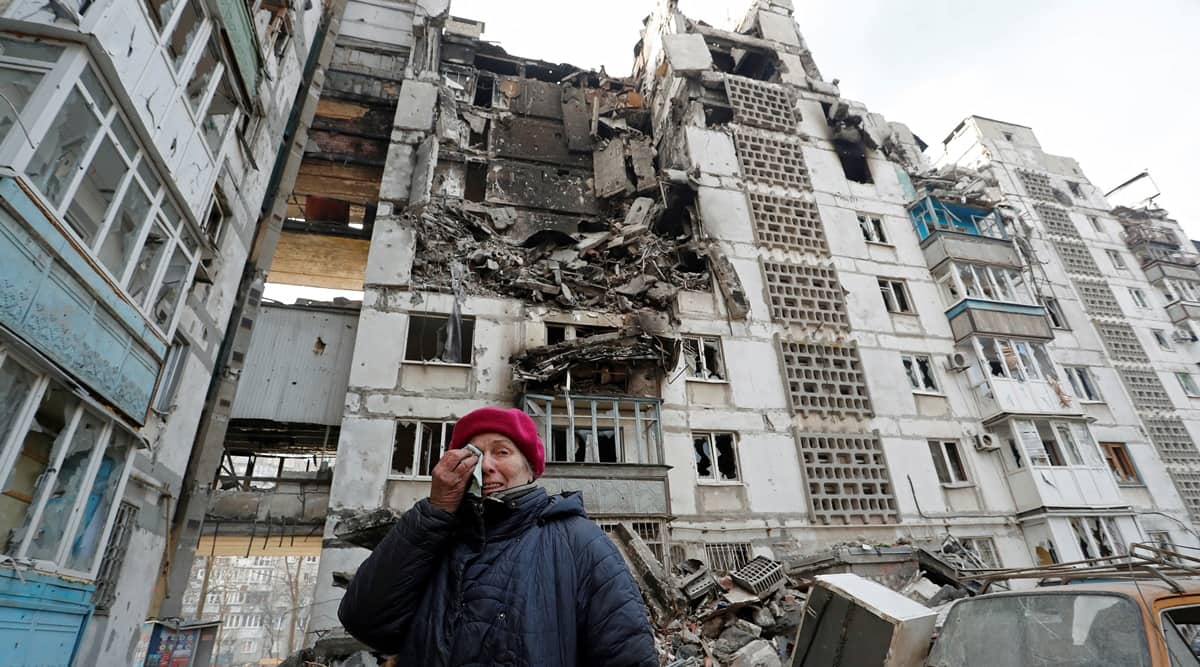 Russia Ukraine War Crisis Live: Ukraine sees no signs on the ground that Russia has given up a plan to surround the capital Kyiv, Ukrainian defence ministry spokesperson Oleksander Motuzyanyk said on Monday. The disposition of Russian forces during the past 24 hours has seen no significant change, but Russia has gained more ground in the vicinity of Mariupol, British military intelligence said.

The Kremlin said that peace talks between Russia and Ukraine may get underway in Turkey on Tuesday and it was important that they would take place face-to-face, after what it described as a lack of major progress in negotiations so far, news agency Reuters reported. Russian President Vladimir Putin and his Turkish counterpart Tayyip Erdogan agreed in a telephone call on Sunday for Istanbul to host the talks, which Ankara hopes will lead to a ceasefire in Ukraine.

Turkey said the talks could begin as early as Monday, but Kremlin spokesperson Dmitry Peskov said that was unlikely as the negotiators would only be arriving in Turkey on Monday. Meanwhile, Deputy Prime Minister Iryna Vereshchuk has said that Ukraine has no plans to open any humanitarian corridors to evacuate civilians from besieged cities Monday because of intelligence reports warning of possible Russian “provocations” along the routes. Russia is increasingly focused on grinding down Ukraine’s military in the east in the hope of forcing Kyiv into surrendering part of the country’s territory to possibly end the war.

Dragi tells Zelenskyy he has Italy’s backing
Italian Prime Minister Mario Draghi on Monday discussed the latest developments of the war in Ukraine with its president Volodymyr Zelenskyy and reiterated Rome’s support for the Ukrainian authorities and people, Draghi’s office said.

“President Zelenskyy lamented the Russian blocking of humanitarian corridors and its continuing siege and bombardment of cities, including schools, resulting in civilian casualties, including children,” Draghi’s office said.

Draghi expressed Italy’s “full willingness to contribute to international action to end the war and promote a lasting solution to the crisis in Ukraine”. (Reuters)

Russia will suffer the severest of consequences for Ukraine attack, says German chancellor
Moscow broke all rules of international order by using force to shift borders and it will be Russia that will most severely suffer the consequences of this, German Chancellor Olaf Scholz said on Monday.

The need to guarantee security in Europe is one of the core insights of the post-war period that everyone including Russia agreed on after 1990, Scholz said in a news conference after meeting Swedish Prime Minister Magdalena Andersson.”

There can only be one answer to that. First, we call on Russia to stop the war. Second, we make ourselves so strong that an attack on EU or NATO countries does not take place, because we are strong enough to answer that,” Scholz said. (Reuters)

Kremlin says Biden’s remark on the end of Putin is alarming
The Kremlin said on Monday that US President Joe Biden’s remark that Vladimir Putin “cannot remain in power” was a cause for alarm, in a measured response to a public call from the United States for an end to Putin’s 22-year rule.

“For God’s sake, this man cannot remain in power,” Biden said on Saturday at the end of a speech to a crowd in Warsaw. He cast Russia’s invasion of Ukraine as a battle in a much broader conflict between democracy and autocracy.

The White House tried to clarify Biden’s remarks and the US president said on Sunday he had not been publicly calling for regime change in Russia, which is the world’s largest country by area and has more nuclear warheads than any other.

Asked about Biden’s comment, which received little coverage on Russian state television, Kremlin spokesman Dmitry Peskov said: “This is a statement that is certainly alarming.”

Robert Habeck told reporters that “all G-7 ministers agreed completely that this (would be) a one-sided and clear breach of the existing contracts.” He said officials from France, Germany, Italy, Japan, the United States, the United Kingdom and Canada met Friday to coordinate their position and that European Union representatives also were present.

Habeck said that “payment in ruble is not acceptable and we will urge the companies affected not to follow (Russian President Vladimir) Putin’s demand.”

Putin announced last week that Russia will demand “unfriendly” countries pay for natural gas only in Russian currency from now on. He instructed the country’s central bank to work out a procedure for natural gas buyers to acquire rubles in Russia. (AP)

The newspaper, which has already removed material from its website on Russia’s military action in Ukraine to comply with a new media law, said it had received another warning from state communications regulator Roskomnadzor on Monday about its reporting, prompting it to pause operations. (Reuters)

Kremlin says Russia-Ukraine talks in Turkey could start on Tuesday
The Kremlin said that peace talks between Russia and Ukraine may get under way in Turkey on Tuesday and it was important that they would take place face-to-face, after what it described as a lack of major progress in negotiations so far. Russian President Vladimir Putin and his Turkish counterpart Tayyip Erdogan agreed in a telephone call on Sunday for Istanbul to host the talks, which Ankara hopes will lead to a ceasefire in Ukraine.

Turkey said the talks could begin as early as Monday, but Kremlin spokesperson Dmitry Peskov said that was unlikely as the negotiators would only be arriving in Turkey on Monday.

“While we cannot and will not speak about progress at the talks, the fact that they continuing to take place in person is important, of course,” Peskov told reporters on a conference call. “We are adhering to a policy of not disclosing any information about the talks, which we think could only hurt the negotiation process.” Peskov added that no major progress had been made in the talks themselves, or on the idea of a potential meeting between Putin and Ukrainian President Volodymyr Zelenskyy. “Unfortunately, we cannot see any substantial achievements or breakthroughs (in the talks) so far,” he said.

In separate comments, Russian Foreign Minister Sergei Lavrov said a meeting between the two leaders would be counterproductive if it were held now. He said they should meet once the sides achieve progress. “A meeting between Putin and Zelenskyy is needed as soon as we will be close to resolving all key issues,” Lavrov said in an interview with Serbian media. (Reuters)

Displaying ‘Z’ symbol could be criminal act in Germany, ministry says
Individuals who display the letter “Z” in Germany to symbolise support for Russia’s war in Ukraine could be liable to prosecution, an Interior Ministry spokesperson said on Monday.

The interior minister for the state of Berlin said earlier that city authorities would jump on cases of the Z symbol being used to endorse Russia’s aggression, following announcements by Bavaria and Lower Saxony that they too would punish such acts.

A spokesperson for the federal government’s Interior Ministry told reporters: “The letter Z as such is of course not forbidden, but its use may in individual cases constitute an endorsement of the Russian war of aggression.”

The letter Z has been used as a marking on Russian military vehicles taking part in the conflict and has been adopted by Russians supporting the war, with it being prominent on flags and at pro-Kremlin rallies.

“The Russian war of aggression on Ukraine is a criminal act, and whoever publicly approves of this war of aggression can also make himself liable to prosecution,” the Interior Ministry spokesperson told a regular government news conference. (Reuters)

Ukraine insists on territorial integrity as talks loom
With peace talks between Russia and Ukraine set to take place in Turkey this week, Ukrainian President Volodymyr Zelenskyy has insisted on the territorial integrity of his country after earlier suggesting he was ready for a compromise.

Zelenskyy said in a video address to the Ukrainian people late on Sunday that in talks due to take place in Istanbul his government would prioritise the ‘territorial integrity’ of Ukraine.

But in comments made to Russian journalists earlier in the day, Zelenskyy adopted a different tone, saying Ukraine was willing to assume neutral status and compromise over the status of the eastern Donbas region as part of a peace deal.

In the video call that the Kremlin pre-emptively warned Russian media not to report, Zelenskyy said any agreement must be guaranteed by third parties and put to a referendum. (Reuters)

The Kremlin also expressed concern after US President Joe Biden called the Russian leader Vladimir Putin a “butcher” over his military operation in Ukraine. (AFP)

Last EU train out of Russia arrives in Helsinki
Just after 7pm on Sunday, the Allegro express train from St Petersburg pulled into the Finnish capital, marking the closure of the last rail link between Russia and the EU.

Finnish railway operator VR announced on Friday that it was suspending the Allegro service, which since Russia’s invasion of Ukraine has been regularly sold-out with Russians eager to get out before Western sanctions make leaving all but impossible.

“Now that I’ve picked up my cats I don’t have a reason to go back, I have everything that’s most valuable to me,” said Alex, who got off the train wheeling a carry case containing his two long-haired pets.

The Muscovite who has lived for some years in Helsinki gave only his first name.

“The situation in Russia has become more complicated,” university student Ivan told AFP, travelling with his mother from Moscow where he studies back to his home in Portugal for the Easter holidays.

nbsls clubGeneralJanuary 13, 2023
North Burleigh Surf Life Saving Club is a friendly and family-oriented Club with established programs in all aspects of Surf …
END_OF_DOCUMENT_TOKEN_TO_BE_REPLACED

fernando4562 fernando4562GeneralJanuary 6, 2023
The Lilli Kay CBD Gummies has many benefits in the customer’s body as it eliminates mental and physical ailments in …
END_OF_DOCUMENT_TOKEN_TO_BE_REPLACED