By Type of Distribution Channel:

By Source of Lead Generation:

In 2021, more than XX% of lead generations is done through dealership walk-ins. Potential customers visit offline retail stores to check the used smartphones, enquire about the prices and its features. People prefer visiting the store, checking the used smartphones by themselves; personally, undergoing the quality checks for their satisfaction.

By Type of Marketing Channel:

Marketing channels are tools and platforms that an organization uses to communicate with its target audience. In 2021, online marketplaces dominate this market with a XX% market share. Marketing through online marketplaces is popular among all types of online and offline businesses. Companies like Erafone, Renan Store etc. who have a strong presence offline, carried out their marketing through social media platforms or their own websites.

By Type of Sales:

C2C sales of used smartphones only contribute around XX% of the market share. Customers directly selling it to new customers is rare. It mainly happens in the unorganized used smartphone marketplace or through classified platforms. Classified platforms just act as an intermediary between the buyers and the sellers. The transaction takes place offline. Majority of the sales happen through offline dealers or online marketplaces through a B2C business model.

By Brand of Smartphone:

There are many offline stores such as Ekacelluler, DigiMap, Renan Store etc. that just deal in used iPhones. ~XX% of the used smartphone population prefer an iPhone as these phones have a good brand recognition and provides a user-friendly experience to its customers. Buying a new iPhone could be expensive for a large proportion of the population, hence they prefer second-hand handsets of these brands. 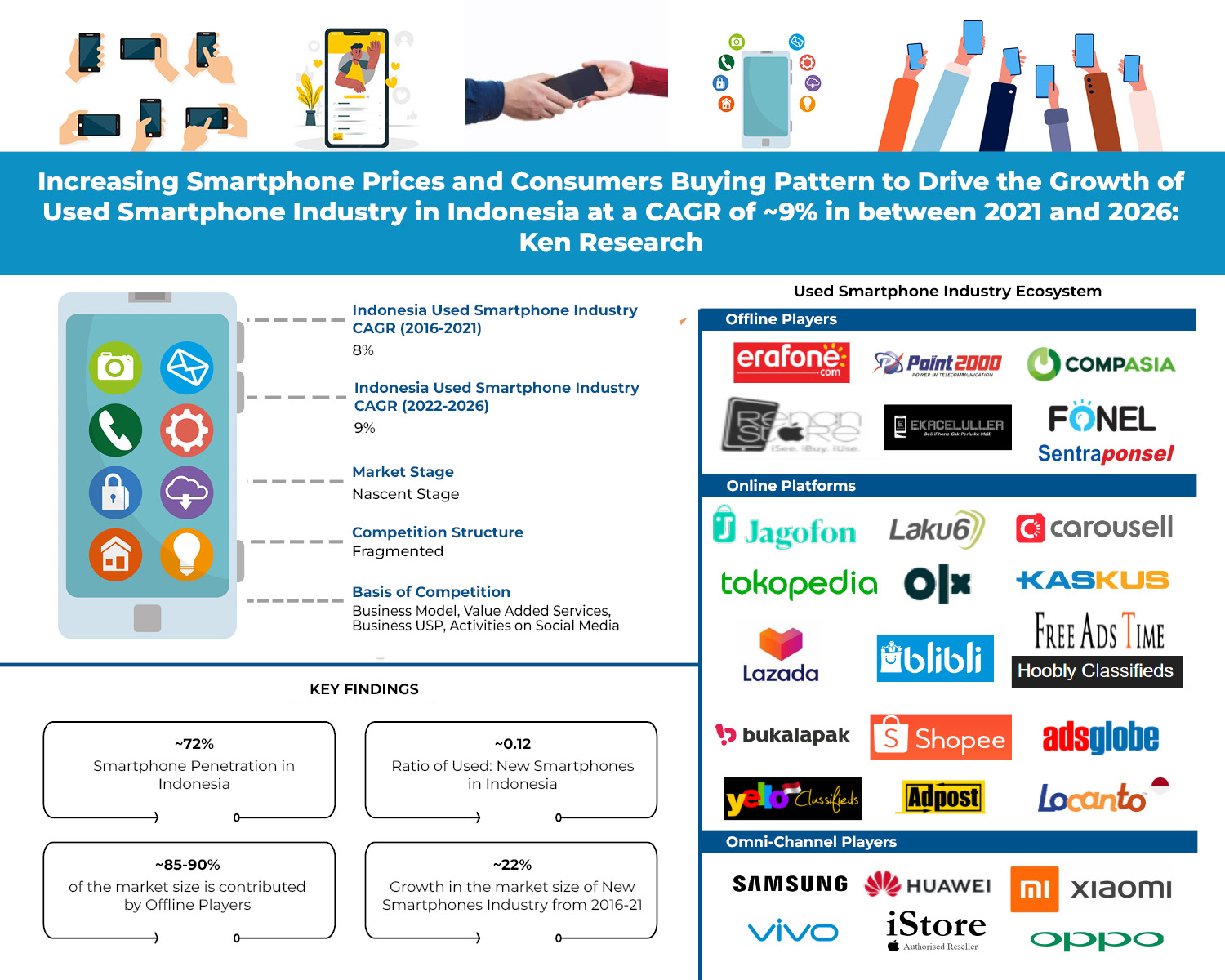 By Age of Smartphone:

By Purchase Across Geography:

By Price of Smartphone:

Buying an upper end or premium smartphones could be expensive for a large proportion of the population, hence they prefer second-hand handsets of these brands. ~XX% of the used smartphone population prefer buying smartphones worth more than Rp 3Mn.  The low-end and mid-ranged used smartphones are mostly available for brands such as Oppo, Xiaomi, RealMe etc.

By Type of Network:

Majority of the used smartphones in Indonesia have 4G and 3G network. 2G network is near to being obsolete. The new generation smartphones do not have compatibility with 2G networks. Network providers such as Smartfren, 3, Indosat, XL and Telkomsel have more than XX% availability of 4G network in Indonesia.

An ideal size of used smartphone preferred in Indonesia is that of an iPhone 7, which is 4.7 inch tall. XX% of the population prefer smartphone screen size to be between 4.5-5.5 inch.

Indonesia’s Used Smartphone Industry is highly fragmented with presence of large number of offline players. Each offline player has its own business USP, hence, it restricts the dominance of single player in the market. A notable shift in consumer preferences post COVID-19 has contributed in the emergence of online used smartphone industry. The online used smartphone industry is consolidated with a few online platforms for used smartphones. These entities These online platforms either adopt inventory holding model or consignment-based model. These players compete amongst each other on the basis of business model, value added services and brand value. The offline players have a large presence on social media, especially on Facebook and Instagram. They post about all their products with their prices as well as other promos and discounts. The report provides a cross comparison of top players in the online platforms as well as top offline players. ecosystem based on variety of parameters.

The market size of the used smartphone industry is expected to grow at a five-year CAGR of XX% increasing from USD XX million in 2021 to USD XX million in 2026. Post COVID, an increase in the number of transactions through online platforms have been witnessed. The ease of convenience of getting a used smartphone at the doorstep from a certified seller and trusted marketplace, has resulted an increase in the share of online platforms in the market size of used smartphones industry in Indonesia.

By Type of Distribution Channel

By Type of Marketing Channel

By Source of Lead Generation

By Type of Sales

By Brand of Smartphones

By Age of Smartphones

By Price of Smartphones

By Purchases Across Geographies

By Type of Network

Time Period Captured in the Report:

For More Information on the research report, refer to below link: –

Prathamesh GavadeGeneralAugust 3, 2022
The report is attuned with the latest market changes and economic landscape with regard to the currently unfolding COVID-19 pandemic. …
END_OF_DOCUMENT_TOKEN_TO_BE_REPLACED

vandana manturgekarBusinessMarch 23, 2022
The construction equipment rental market is projected to reach value of USD 135.7 Billion by 2027, according to a current analysis by …
END_OF_DOCUMENT_TOKEN_TO_BE_REPLACED

samir patelBusinessJune 7, 2022
1. Networking is a marathon, not a sprint I started going to the same networking events regularly, and I met …
END_OF_DOCUMENT_TOKEN_TO_BE_REPLACED